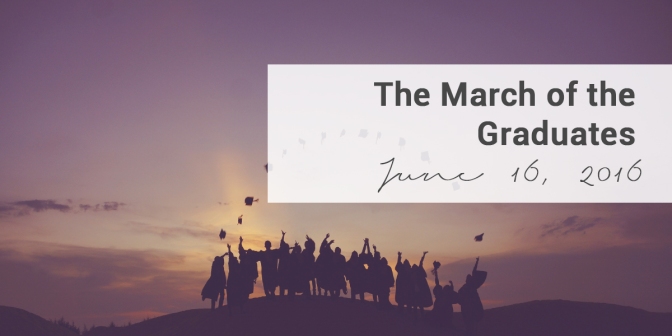 Last week I sat in the packed bleachers of Dos Pueblos High School and watched my sister, along with others in the church, graduate.

There were over 500 young faces strutting along the track in their blue and gold gowns, all belonging to a network of loved ones and friends who have supported and guided them throughout their childhood, now bracing themselves for imminent sunburns as they cheered from the sidelines.

The principal, Shawn Carey, then delivered an inspirational speech about being prepared to go off to college and into the world.

As she spoke, I couldn’t help but recall my own graduation at the same exact spot two years ago. I even remember Mrs. Carey handing me my diploma and quickly adding, “nice writing” as she shook my hand, referring to the times I’d personally interviewed her for the school paper my senior year.

Now my little sister has gone through the same educational institution, and is ready for college.

Unlike my own post-high school path, however, she will be moving across the country to attend Florida Gulf Coast University. It’s an exciting time for her and everyone who knows her, but at the same time her upcoming move is a reminder of the bittersweet side of graduations.

Of course, change is not a bad thing. Imagine graduating and living the exact same life after, except with a diploma hanging on the wall.

In Acts 3, Stephen recounts the history of Israel, including the man whose obedience started it all. Abraham was an old man living in his hometown of Midian, when God suddenly called on him and commanded, “Leave your country and your people,” God said, “and go to the land I will show you.”

The first half of that sentence boldly asks for a complete one-eighty from Abraham, whereas the second half provides the vaguest instructions the Lord could possibly give. He doesn’t even tell Abraham where he’s going. All he tells him is to leave everything he’s ever known and go from there.

I doubt all those graduates proudly waving to their parents last Wednesday know what really lies ahead of them. They have ideas planned out – some even provided visuals via decorations on their caps of the colleges they’ll soon call home. Yet even then they likely harbor insecurity about adjusting well into their new environments.

Change is scary, and no matter how thoroughly someone has the next ten years planned out, there will always be room for uncertainty. How does God handle this? By plainly saying “…and go to the land I will show you.” It’s not our job to know everything, but it is our responsibility to trust God and follow him.

When I first read that simple verse, I thought, “how could anyone follow directions so blindly?”

Immediately after, however, it hit me on the most basic level that is exactly what faith in action looks like. We’re not blind, but led by the only being who actually knows our futures.

At times like graduation when that word, future, gets tossed around a lot, I’d say God should also be in that conversation just as often.